Hybrid Apps vs Native Apps – What to choose.

In this article, you will finally get answers to the burning questions about the differences between hybrid and native apps. And especially: what choice will work for you better?

During the last 5 years, we have worked with various clients and most of them have one thing in common - they are struggling with this decision. Either they are missing knowledge or they haven't dug deep enough to know what to choose. That’s why we came up with a process to help you and your business to choose between hybrid and native apps.

Let’s jump right into it!

6 questions to get started

Every time a client wants a new mobile application, we ask them the following questions. To get a feeling of what they typically answer, we provided two examples per question:

What’s your goal with the app?
We have an e-commerce shop but want an app now.
We have this idea and it’s only working on mobile.

Do you have a minimum viable product (MVP)?
No, we only have the business model.
Yes, we created a mobile-first landing page with some functionality.

Do you have your own developers and designers?
Yes, but only Juniors.
No, that’s why we need you.

What’s your budget?
Let’s make the most out of it.
No worries, we are prepared.

Who is your target group?
Tech-savvy and under 40.
An average person from 20-60.

To understand why we ask these questions, you need to know the differences between native and hybrid apps first. Ready?

What’s the difference between a native and hybrid app?

Native applications are smartphone applications designed for mobile operating systems (yep, that’s why iOS is called that way). The programming languages Java or Kotlin for Android and Objective-C or Swift for iOS, are the most common languages to do that. However, that also means that you need at least two different developers if you want iOS and Android - besides one hell of a backend engineer. And because of that, native apps are more expensive than hybrid apps. That’s why some businesses start only with one operating system to avoid more costs.

Let’s talk about the advantages and disadvantages of native apps.

Since native applications are built in their own environment, the UX and performance are much better than hybrids. Basically, because it’s made out of one code.

But the biggest advantage of native apps is the easy access to built-in applications like calendar, camera, address book, music player, and more. This makes achieving great performance an easy task. Why performance is such a key component, will be explained later.

Let’s not forget about security. Unlike hybrid apps, native apps can be made more secure because they can leverage platform-specific built-in security features. Additionally, hybrid applications are dependent on web views which means that they are prone to injection attacks when using certain APIs/interfaces. Also, they have security vulnerabilities not just unique to the used programming language, but also web browsers and those affect native apps.

What about the disadvantages?

Since developing a native application is required on both iOS and Android platforms, it could be more time and money consuming than building a hybrid one especially when building a more complex app.

How come? You will understand in a second.

Hybrid apps are a combination of a mobile website and a native application - specifically, the HTML5 website is packed in a native wrapper. This native wrapper includes built-in apps like camera and calendar.

There are many technologies used for developing hybrid apps. The top ones worth mentioning are React Native, Xamarin, Ionic, and Flutter.

What about the advantages and disadvantages of developing hybrid apps?

The advantages that you already might suspect are the lower cost and faster development time. Since developing a hybrid app covers both Android and iOS platforms, you will usually have to hire only one team (instead of hiring both iOS and Android teams). Because they are developed with HTML5, the costs to build a hybrid app is way lower than for a native app. With that, it is easier to maintain a hybrid app than a native since all updates will be targeted on both platforms. All of these advantages are the result of a single code base.

When it comes to disadvantages, hybrid apps are more dependent on internet connection because of the cross-platform frameworks. This means that some of the features of the app won’t be available when lacking a connection.

To access some of the functionalities such as camera and calendar the user won’t see a difference but might feel one. Because the HTML5 communicates with the native wrapper through more layers, it feels slower.

They look like native apps but due to HTML5, their UX and performance lags behind. That means users can feel a slight delay when using built-in applications.

To sum up, we have a little infographic to show you the differences: 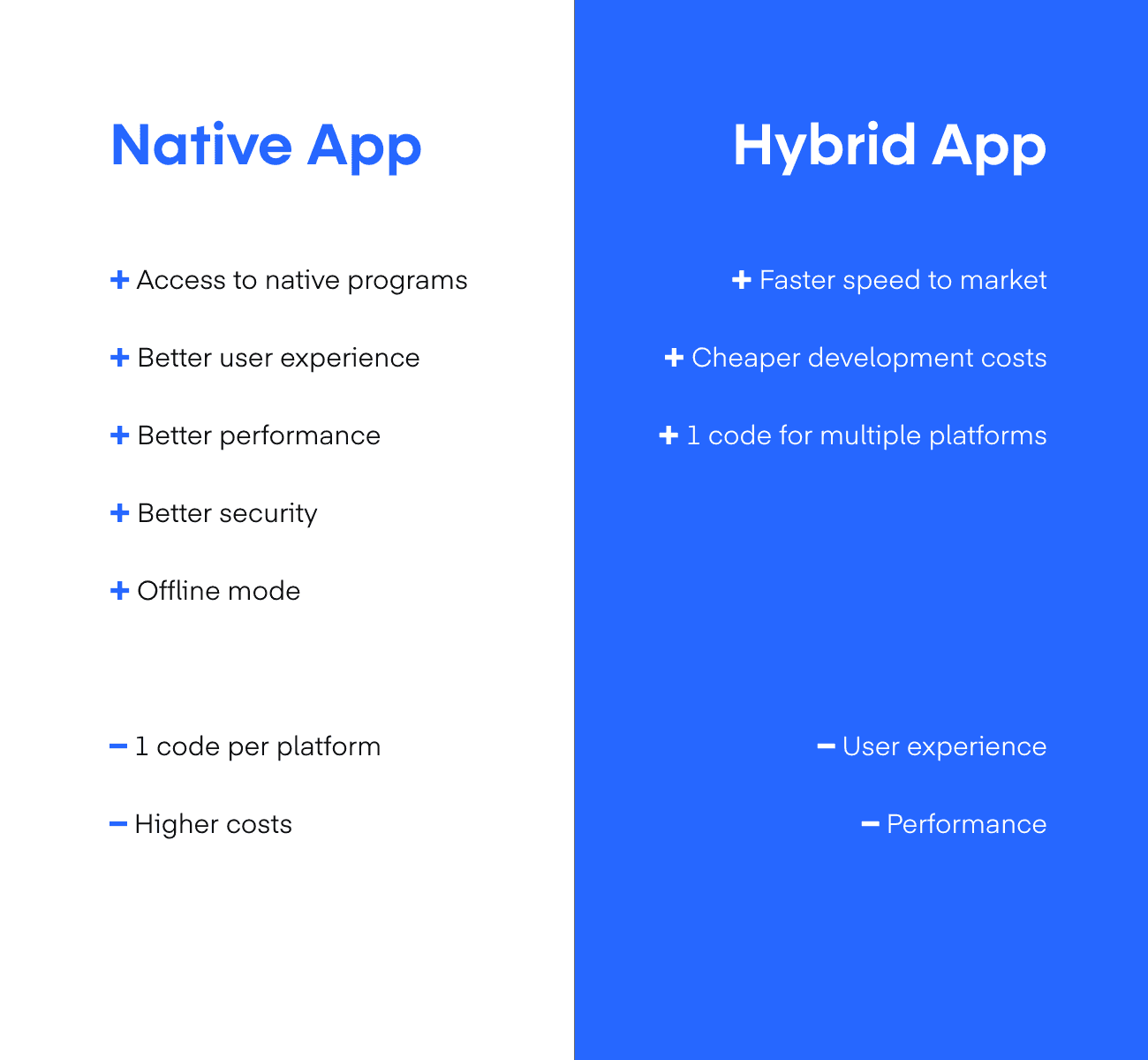 App performance and UX - the key player for retention.

You may ask yourself why we make such a big deal about performance and UX, right?

Well. Have you ever downloaded an app, used it for a couple of minutes and deleted it right away?

We have. And we know why you have as well. Performance and User experience.

As we explained before, a hybrid app is a website in a native wrapper. That means not only the website but also the native wrapper with its navigation is hosted on a server. And if this server has too many requests or any issues, the app will be slow and perform badly. In the mobile-first world we live in, speed is the key. Or do you just love the look of that loading spinner?

And if you still don’t believe us how important performance is. This might change your mind.

As Netsolutions.com explains: “Performance plays a significant role in the success of any online venture as high performing apps engage and retain users better than the poor performers.” 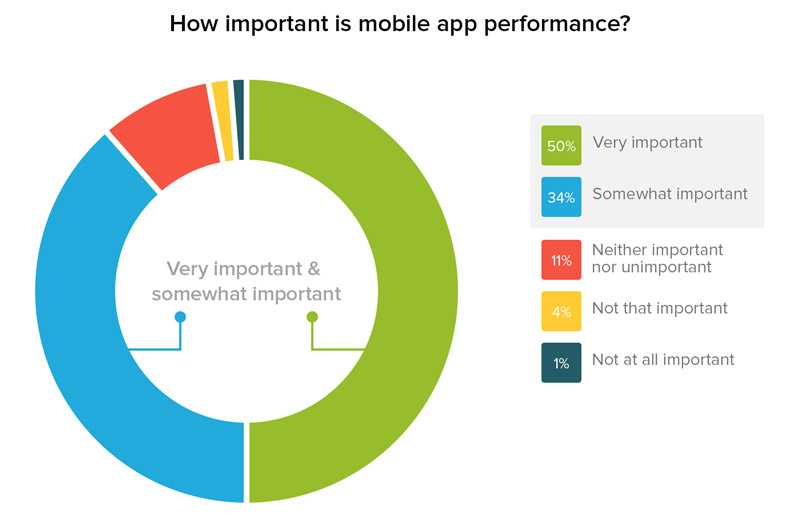 YML also found out that 84% find performance important or very important when it comes to apps.

In other words, only 16% are willing to accept low performance. Users start to lose trust and won’t come back.

However, this doesn’t mean that hybrid apps in general have a bad performance. We simply want to show you that this aspect can’t be ignored. For instance, the Facebook app was hybrid for ages. But with growing user numbers and more functionality, hybrid approach just wasn’t enough anymore.

So which do you choose??

So far you have learned the difference between native and hybrid apps and that performance plays a key role in mobile applications. This information may lead you to choose a native app. But not so fast, friend. In our experience, performance is key, but your line of business, budget, and resources will be critical in making the decision. That’s why we have another set of questions to help you decide.

If you answered some with no, consider a native app. It will be more expensive but for the long term definitely better for your business. If you answered all with yes, you should go for a hybrid version. It will be cheaper, faster and hiring your own engineers won’t be such a problem.

Still unsure? Write to us at hello@9y.co with the subject line “hybrid or native?” and we will send you an invite to a free get-to-know session. For us to better prepare, please answer the first questions of this blog post in the email.

Native and hybrid apps both have their place since each type is crucial to individual projects. However, in most cases, native is still the way to go since performance, security, and UX are the key factors for an app. But if there is not enough time and/or money (or features), choosing a hybrid way over a native application is the right choice. Personal preferences should not be your deciding factor. Instead, let your business case decide.

Get a quote or send us some love.